Rare Orchid flowers for the first time since 1973

The 17th October was a historic day for the Trust and in particular for the La Rochelle property when a rare orchid flowered on the 17th October 2106, this is only the fourth time that it has flowered to our knowledge, the last time being in 1973 so this is a cause for celebration.

The orchid has quite a unique history attached to it: it was found by Sir Stephen Courtauld on one of the eastern Java Islands during his travels there sometime before the start of the second world war. It is thought to be a natural hybrid as there have been no others like it found. It is a unique Vanda orchid different to other lombakensis. Sir Stephen named the orchid, Vanda lombakensis Virginia Courtauld after his wife Lady Virginia Courtauld.

The orchid was taken by Sir Stephen back to England where it was kept in a glass house at Eltham Palace. It flowered once then during the second world war and survived when the glass house that it was in was bombed. A small piece of the plant was recovered and re potted. It was then brought to Southern Rhodesia when Sir Stephen and Lady Virginia moved to La Rochelle near Umtali, present day Mutare.

The Trust would like to thank its dedicated and professional ground estate team headed by Mr Kevin Martin for making this piece of history happen.  We hope you enjoy the photographs of the rare and beautiful orchid below. 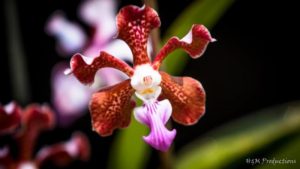