An aristocratic African B&B full of orchids and roses A very British couple left behind a palace in south London to create a horticultural gem in Zimbabwe. Lisa Grainger takes a tour of La Rochelle 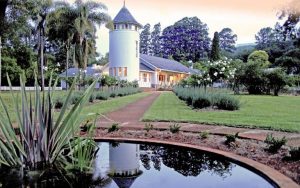 There were few sixty somethings in the Fifties who would have chosen to leave an English home as spectacular as Eltham Palace in south London to build a new life in Southern Rhodesia (now Zimbabwe).There are even fewer who, upon ­retirement, would have bought a ­rundown African farm and turned it into the finest arboretum in the southern hemisphere.

But Sir Stephen and Lady Virginia Courtauld weren’t any conventional retirees. Stephen had been awarded the Military Cross for his bravery in the First World War and knighted for his philanthropy (including his support of the Royal Opera House, the Fitzwilliam Museum in Cambridge and Ealing Film Studios). Virginia was the headstrong London-educated daughter of an Italian marquis who had scandalised society in Thirties Britain by not only divorcing her aged aristocratic Italian husband, but also by having a snake tattooed up her leg.

In their 15th-century palace, where Cardinal Wolsey took his oath of office and where elite guests such as Rab ­Butler and the Duchess of York (later the Queen Mother) dined, the couple lived a glamorous, carefree life. As well as their own palace, they had their own yacht and their own plane on which to explore the world.

The one thing they didn’t have was sunshine in which to grow the exotic plants they had gathered on exotic journeys aboard their 210ft, 30-crew steam-yacht, Virginia. The couple were both keen gardeners and Stephen had inherited a love of orchids from his father, Sydney. In 1949, fed up with post-war Britain and rain, the couple sailed to Cairo, then flew their twin-engined plane to Cape Town, and on to Southern Rhodesia.

When they flew over the beautiful Imbeza valley in the Eastern Highlands, with its 3,000ft hills, trout streams and forests, and discovered a farm which had once been called La Rochelle – the part of France from which Stephen’s French-Huguenot family had fled in the 1500s – they decided their fate was sealed.

In 1951, once they had been granted Rhodesian residence, they bought the farm and started to build a house – an expansive modernist bungalow with a French-style turret, Welsh slate roof and sprung-wood dance floor, which would be their home for the next 20 years.

It was to be the biggest personal project of their lives – and one, according to Stephen’s memoirs, that gave them more pleasure than any other. When they died, in the early Seventies, the couple left behind one of the finest arboretums in the southern hemisphere, one of the most beautiful formal gardens in the country, and one of greatest collections of orchids on earth.

Like many properties in Zimbabwe, La Rochelle has seen several dramatic turns since it was built. The Courtaulds were – unlike many of their countrymen in the former British colony – liberal, and were among the key sponsors of the Capricorn Africa Society, which sought to foster good relation between races.

During the country’s fight for independence, the Courtaulds hosted not only British aristocrats and politicians, but also opposition leaders such as the future president Robert Mugabe, Leopold Takawira, Herbert Chitepo and Ndabaningi Sithole, all of whose signatures were etched, using a diamond stylus, into a glass window in the  couple’s home.

When the Courtaulds died, childless, the property was left to the people of Zimbabwe, whom Virginia called her family – a bequest protected by an Act of Parliament and the National Trust of Zimbabwe – along with a gift of $250,000 to cover running costs. While their intentions were honourable, their timing was unfortunate. A liberation war had broken out and the house was around four miles from the border with Mozambique, where hundreds of guerrilla fighters were trained. It was neither safe for anyone to live at La Rochelle nor to visit the property. 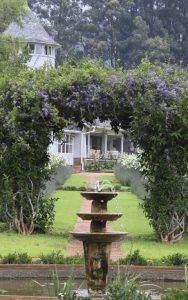 La Rochelle has been restored to somewhere near its original glory

By the time the war was over in 1980, and Zimbabwe was born, the funds left by the Courtaulds were depleted and the property had started to decay. Wild bush had taken over the 20 hectares of garden, in which the couple’s beloved pet lemur was buried. The greenhouses had collapsed. Flagstones on paths built to help Stephen wheel around in his latter years had been stolen. And the couple’s collection of 365 trees amassed in 25 countries had been subsumed by indigenous greenery.

When La Rochelle’s current head gardener, Nicholas Kashiri, came to work in 1972 as a 16-year-old apprentice – one of 55 full-time gardeners employed by the British couple – it was, he says, “the most beautiful garden you could imagine. “It had hundreds of rose bushes, of all colours: red, orange, yellow. Big wide beds planted with asters, lavenders, roses, salvia, agapanthus, cannas, hebes.”

He adds: “In summer we’d plant marigolds, zinnias, salvias, then in spring petunias, calendulas, snapdragons and lots of white annuals. People came from all over the world to see it.”

Then, in the Eighties, the hard times arrived. A grant from the Zimbabwean treasury was cut. As Mugabe continued to incite supporters to take over white-owned farms, donors abroad became nervous about sending funds. Inflation rose to 231 million per cent, and people across the land suffered and starved. Oddly, it was in part thanks to these desperate times that 17 years ago the property found a saviour.

When a local farmer, Jannie Martin, had three consecutive properties taken by Mugabe’s supporters, he decided that he “should try to use the negative to do something positive”.

Having lived in the area all of his life, he explains, he had grown to love the property, and admired the ­philanthropic spirit of the Courtaulds, who had paid for schools, civic halls, museums and clubs across the country – from the National Gallery in Harare to a homecrafts centre for local women. So he set about doing what he could. Gardeners who worked with him were paid in food, grown on the land. The property was leased as a B&B, painted, and partially restored, to lure visitors.

When, in 2013, two donors were found, serious work began to turn the home into the comfortable guesthouse and national garden it is now. With the help of nine gardeners, the shade houses and orchid-houses were rebuilt. The pathways and funnels bringing water from mountain streams were fixed. And, finally, 10 hectares of land were ploughed and turned into an organic herb farm, to ensure that the property could continue to fund itself.

Walking around the garden today, it seems incredible that such a magnificent property was almost lost. From the grey-painted modernist bungalow, with its art deco furnishings and homely bedrooms, views stretch out over acres of lawn, dotted with giant trees, towards forested hills. 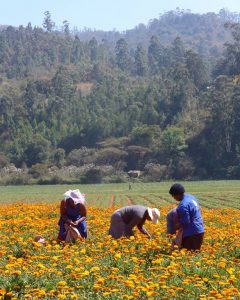 To the east, the rose garden has been replanted by Henrietta Courtauld (a distant relative by marriage) and Bridget Elworthy, founders of The Land Gardeners, based in London and Oxfordshire, with hundreds of pink and white blooms: ‘Iceberg’, ‘House and Garden’, ‘Duet’ and ‘Virginia’ (named after Lady Courtauld). A long avenue of white standard roses and lavender created by them now leads to the original circular pond, where the pergola beyond is still planted with a thick roof of purple Queen’s wreath.

Since The Land Gardeners visited the property in 2014 – when, Henrietta remembers, “it was pretty much a ruined garden, albeit a magical one” – a large pond has been cleared, uncovering an island, now reached by a pretty bridge. Hillsides of azaleas from Nepal, India, China, Burma and Japan have been uncovered.

Terracing has been planted with hundreds of white agapanthus and orange clivia. And on the hill, dozens of beds are now thick with aloes, cacti, cycads and cymbidium orchids. This is now a garden in which days could be spent exploring: examining trees from around the world, taking in the scents of enormous magnolias and pink begonias; marvelling at the variety of palm trees; walking trails in the indigenous forests and, of course, examining orchids.

Stephen had one of the finest collections of orchids in Africa, and today, under the care of both Martin and Nicholas Kashiri, as well as Martin’s son, Kevin, who now runs the garden, the six orchid houses are flourishing. In regulated conditions, orchids thrive in pots on sunny shelves, attached to tree trunks, hanging in enormous balls.

There are red and purple Vanda lombakensis from Malaysia; phalaenopsis of all shades from East Asia; dendrobium, arachnis, bulbophyllum.

The most treasured orchid of the collection – the rare Vanda lombakensis‘Virginia Courtauld’ – Kashiri shows to me with some pride. The Courtaulds found the plant in Java in the Thirties, and took it back to their Eltham Palace greenhouses, where it flowered just once. After the palace was bombed, bits of the orchid were rescued, and when the couple came to Zimbabwe, they brought it with them. Since then it has flowered three times, including last year, under the keen plantsman’s care. “For me, when it flowered it was like an omen,” Kashiri says, smiling. “Like this house, it almost died. But now it’s blooming again. That makes me very, very happy.”

La Rochelle (larochellecentre.com) now welcomes guests, from $75pp (£54) a night, B&B, and $20 for a three-course dinner, featuring local produce. It periodically also hosts gardening weeks, yoga weeks and art courses, and welcomes donations to maintain the gardens through the Zimbabwe National Trust (ntoz.org). May to October is peak season; for British Government advice on travel to Zimbabwe, visit gov.uk/foreign-travel-advice/zimbabwe