The mountain experienced a very wet start to 2017, with rainfall for the season (to March 2017) of over 1700mm and all three Connemara Lakes are again full and spilling furiously.  The torrential rains  flooded the car park – it dried out gradually and reopened after some filling and levelling.  The 2m wide x 30m long contour ridge that we dug at the base of Nyamutoro (World’s View Mountain) thankfully, prevented a more serious situation.

In preparation for the 2018 rains extensive ground-work was undertaken to prevent any further flooding.  Pits and trenches  were dug and backfilled to channel the rainwater away from the car park and down to the western slopes of the site.  The rains brought on an abundance of wild flowers and the site is looking stunning. 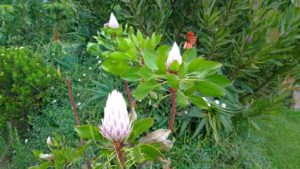 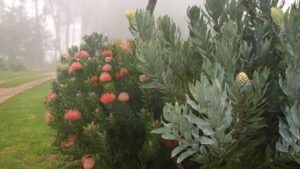 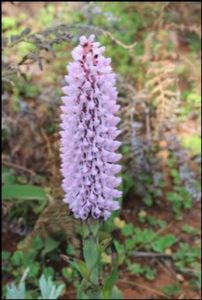 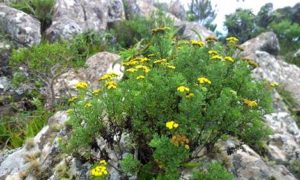 But, this is in stark contrast to the land outside the fence, where there is evidence of the damage and degradation caused by the cattle that are driven up the mountain to graze.  It is our intention to, once again, petition the powers that be, to stop these cattle coming up the mountain and left unattended night and day. Up to now our complaints and those of the Board of Little Connemara have not been heard.  The loss of the flora, fauna and birdlife that once inhabited the area is also of great concern: this due 100% to not only the overgrazing by cattle but also the ‘outsiders’ who come with their packs of hunting dogs, under the pretence of ‘looking for their cattle’, meanwhile they are carrying axes, clubs and catapults.

The Little Connemara Estate was declared a bird and wildlife sanctuary some years ago but all the land on the outside of the circular drive that surrounds the Connemara Lakes was acquired by Government in 2002 for eco-tourism.  The conservation of the area has been totally neglected since then.  Snares are constantly being found and removed by walkers and the Connemara residents. The firebreaks are not maintained and some of the land has been given over to potato growers who have exasperated the situation by ploughing and interfering with the natural springs that occur on the areas designated to them.

A large landslide beneath the World’s View toposcope occurred on a path made by the cattle coming up the eastern slopes. Ground cover being reduced through localised overgrazing and trampling has greatly increased the risk of further landslides due to the soil losing the ability to ‘hold’.  There are some further sections that look like they may ‘go’ as well, as some large ‘cracks’ in the soil are apparent adjacent to the original fall. 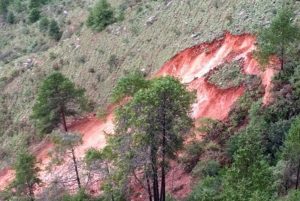 The upper slopes leading to the summit of Nyamutoro and some parts of the lower fenced area of the site are constantly being cleared of pine and other invasive species. It is an on-going exercise to keep on top of this problem but Matirina with chainsaw and the caretakers with machetes have put paid to hundreds of these invaders and the larger trees have been felled and cross cut as firewood for use in the caretakers’ wood stove.

Renovations and extensions to the staff housing reached completion mid-year.  It was a busy time with builders, carpenters and plumbers all working on site at the same time.  The old ‘long drop’ was replaced with a flush toilet and new shower area created so consequently new piping had to be laid and a new soak away dug at the bottom of the caretakers’ garden.  A large French drain was laid at the top of the vegetable garden to take the grey water and help to keep their vegetables watered during the dry season.   Instead of using the local stone we decided to do the extensions in brick/plaster to stay in keeping with the original structure.  This has worked well and resulted in a neat and handsome little building.  An additional window has been fitted to the back bedroom.

The new veranda is sheltered by a shoulder high wall to give protection from the wind and a second wood burning stove installed.  All internal rooms have been fitted with ceiling boards to stop condensation forming and the old inside kitchen has been turned into a sitting room.  Luke and Arthur are delighted with their new home and have asked me to convey their thanks to the National Trust for upgrading their accommodation. They both worked over and above their normal hours to assist in this project and we are grateful to have such dedicated staff in our service.

A new 35m length of picket fencing replaced the old and rotting one along the road boundary which has enhanced that aspect tremendously. A pole fence has been constructed on the inner boundary, hedging planted and a ‘Staff Only’ sign put on the gate.

For the second consecutive year, yet another of our stone gate posts was ‘taken out’ by a bus, followed by an angry bull who ripped the wooden entrance gate into several pieces. Fortunately he was spotted and escorted off the property with his many lady friends before too much damage was done to the gardens!

The 4th picnic table and benches have been completed and an upgrade to their surrounds has been achieved by new planting of azaleas and a bit of further landscaping on the terrace below.  It is rewarding to see the fruits of our labours coming to bear at last, the gardens are full of interesting beds that have now filled out and provide an array of different flowers throughout the seasons, although not all the plants are of an indigenous nature, they provide colour and interest for our many visitors.

There was a drop off in visitors from September due to the ‘cash crisis’ and fear of harassment by police at road blocks.  However, since mid-November this has greatly improved and we have introduced an Ecocash system that works well.

June Weeks continues to bring us aloe cuttings which are being planted along the escarpment.  An old cattle track coming up the eastern slopes (now fenced), has caused considerable erosion, so to combat this a large semi-circular stairway using local stone, has been constructed.  This will make a great spot for large groups wanting to picnic and enjoy the scenery.

A very successful ‘ Carols by Sunset’ was arranged on Christmas eve by Lindsay Lees May, manageress at Little Connemara and Pam and Dave Lee and family, residents of the estate.  Word sheets and Christmas pies were handed out, the rain held off and ‘the hills were alive with the sound of music’.

In 2018 the professional services of Mr Jakob Raath to undertake an ecological study of the World’s View area was commissioned.  The overall aim is to have a database of ecological resources relevant to the area for posterity as well as being an aid in planning and making future recommendations for our site and environs.

Phase I, the pilot study, was completed in January. Jakob returned to site to complete Phase II mid March. The aims of Phase II were to expand on the activities begun earlier as well as collect plants not seen flowering at the time of Phase I.  New areas of the NTZ environs were sampled and more data about the overall environmental health of the area were gathered.

In addition, an extra 2 volunteer days were spent removing the vegetation from the ruins above the car park to expose the sections of walling for future archaeological work. The removal of the vegetation was done in a methodical manner, taking care to cause minimal impact.  We had no idea of the extent of these ‘on-site’ ruins until  Jacob, with the help of Matirina and Luke, discovered that the ruins  are much more extensive than first thought.  We look forward to the return of Rob Burrett to take his archaeological study further.

More of Jacob’s finding on the adjacent land to the south of the World’s View site, reveal  that in this unique area a potential ecological disaster is in the making. Steps are being taken to have this area placed under protection.

As recommended by Rob Burrett, a sign at the start of the path leading to the summit has been placed to make climbers aware of the conditons that may await them.  Mist can decende in minutes so it is adviseable to keep to the footpath and to keep a watchful eye for baboon activity.

Our little ‘Plant Sales’ section is doing well and visitors are delighted to be able to buy plants that they can see in flower in our gardens.  We continue to support Valhalla Nursery in Juliasdale for the azaleas and hydrangeas and Mrs Dalrae Bailey, also of Juliasdale, has become a recent supplier of well established protea plants.

Landscaping and planting the kopje to the south of the toposcope is complete and the first flowering of the Kirstenbosch proteas graced the kopje.  Mr Michael Tucker kindly donated two hardwood benches which were commissioned.   We are immensely grateful for this donation and the benches will be the crowning glory of the kopje. 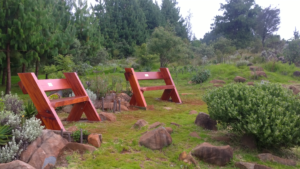 “I’m going to die a happy man – even more proud to be Zimbabwean after visiting this place with my family. Thanks to the hardworking guys for maintaining this awesome place”’ Lional Takawira, Guildord, Surrey, UK.

“This is one of the few places in Zimbabwe still intact and looking lovely as always”. Chervonna Gororo, Harare.

“A return after more than 20 years and I really loved the re-visitation. More beautiful and extraordinary than I remember. Thank you for keeping it well”. Gynthia Baloyi, Ohio, USA.

“We haven’t been to World’s View in years and have been amazed at the beauty and tidiness. The toilets must be the most beautiful and functional in Zimbabwe”.  Snick Nkomo, Harare.

‘One can see God’s hand at work here’. ……….  Someone has kindly added in bold black capitals – ‘with a little help from NTZ!’