The Spider Club of Zimbabwe meet up for an outing into Mabukuwene Nature Reserve on 12th February at 8am before the temperatures started to rise. It was a clear summers day and a small group of enthusiastic kids with their parents came along. One mother was totally terrified of the bush and anything with more than two legs but it was encouraging to see her overcome her fears so her child could join in. As with most spider and bug hunting walks you really don’t need to go far to find anything and after a two hour hunt we have only gone 50m.

The group broke for a tea break and were entertained by Martin Sanderson (Founder of Adventure into Learning) with his story that Mabukuwene as named by Mr Thomas Meikle because this was where he kept his Library (Mabookas)!! After which we went for a walk to the “library” and lookout point and continued the bug hunt. 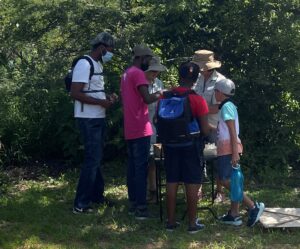 Many thanks go to the staff of the Entomology and Arachnology department at the Natural history Museum for helping out and the National Trust for granting permission to use their Nature Reserve for this outing.

Spiders, insects, reptiles and other things that were photographed during the morning can be viewed at https://www.inaturalist.org/projects/mabukuwene-nature-reserve where there is project for these and any other records for the Nature reserve can be viewed on INaturalist.

Neoscona (Hairy filed spiders) make orb-webs at night which are removed early in the morning. These spiders are commonly found during summer in grassland and low vegetation. A number of species have been recovered from Zimbabwe.

Cheiracanthium species (Sac spiders) are notorious for their cytotoxic venom and small wounds that they can make. There are a number of species in Zimbabwe, those collected were all juveniles so cannot be identified. The females make a silk retreat amongst vegetation and then she encloses herself with the eggs and guards them. Unfortunately none were photographed and all specimens collected were juveniles.

Numerous Jumping spiders, Salticidae, were recorded, including Hyllus and Heliophanus species. These spiders are always fun to watch as they are diurnal with well developed vision, and have various threat displays which they will use when trying to photograph them!

Other plant dwelling diurnal active hunters are the Oxyopes (Lynx spiders) who will leap into the air to catch their prey. At night they usually rest hanging from dragline silk attached to the underside of a leaf.

Various crab spiders were recorded including Tmarus, Synema, Thomisus scrupeus, Misumenops rubrodecoratus, Diaea puncta, Stiphropus bisigillatus and Heriaeus. These are sit-and-wait ambush hunters , mainly active during the day and their gait is side-ways or crab-like hence their name. They have strong bodies and robust front legs enabling them to attack prey much bigger than themselves. They are usually cryptically coloured so they are concealed while they wait for their prey.

Ground dwelling spiders recorded include Zelotes brennanorum, wolf spiders including the fast moving Pardosa, and the wall spider Selenops. Palpimanus species are slow moving spiders found during the day in small sac-like retreats under stones. When walking the strong front legs are held up in the air which are full of receptors. They are spider hunters actively seeking their prey hiding in their retreats.

In the three hours in the Nature Reserve we managed to see a good number of spiders and insects and have a discussion about the importance of spiders in the environment and also a discussion about the various spiders seen and it proved an excellent opportunity for questions and education as there was also a learner guide present who was knowledgeable on reptiles. As the morning progressed the temperatures began to rise, and many invertebrates start finding cooler diurnal resting places and sighting become harder.

Stand just a few kilometres south of Bulawayo City centre and soak up the atmosphere and imagine the area as it was over 100 years ago, with ox wagons and their teams of oxen outspanned in the dry red dust and now final resting place of some of the country’s earliest settlers. What a rugged life they must have led, in the early days of this great country; travelling north to discover more, crossing rivers, valleys, hills and rocky outcrops in their quest for adventure and a yearning to finally settle in this bountiful land. Stand still awhile and cast your thoughts back in time and remember all the brave souls who adventured forth into unknown territory to found this great nation.
Tom Meikle bought Mabukuwene in1937 and often rode there with his daughters. He built the walls around the property, cleared the underbrush, and set the historic wrought-iron gates in the gate posts. When he died in1939 he was buried in a gentle sloping granite outcrop under the spreading arm of a giant wild fig tree. The arms of the fig tree throw a chequered pattern of sunlight and shadow on the granite. Members of his family joined him in later years. Other kopjies and ranks of bushveld trees ring the area and immediately around there is a paddock of golden grass. It was transferred to the National Trust in 1978 and subsequently the grave area was transferred back to the Meikles Trust in 1995.
Mabukuwene is a lovely place, restful and secluded where a person can sit in the sun, relax and think and enjoy 12 hectares of indigenous trees and plants set in an unspoilt area of kopjes with their distinctive pink hue. Stand on an outcrop and admire the view from 1442 meters (4730 feet) above sea level that affords a 360 º view point of the area.
Explore the two small areas of gardens, a plantation of jacaranda trees along an originally proposed drive-way, short lengths of dry-stone walling previously dividing the property into paddocks, a roofless ruined house (the barn) and a circular, stone-walled thatched-roofed lookout on the highest rocks. One of the small garden areas is the site of the grave and the other surrounds the house and lookout point in the centre of the property.
Discover some 80 different species of indigenous trees including some exceptionally fine specimens of Ficus ficus sonderi and EuphorbIa ingens. When in flower they attract a wide variety of birds typical of the habitat, nearly 100 species have been recorded such as Natal Francolin, Guinea Fowl and Spotted Eagle Owls. Look out for small mammals such as squirrels and dassies scampering around in the bush.
And so the wilderness called Mabukuwene continues, emphasizing the preservation of the indigenous flora and fauna and cultural heritage of the area.

Clearing of the invasive weed, LANTANA, is now underway and with the help of Rob Burrett and Mrs Hugill in Bulawayo we will be able to continue work on this historical property in order to attract more visitors for walks and picnics, birding outings. Plans are also proposed to have a cultural village exhibition at the site for the benefit of school children to visit and learn of the local cultural history.