COP 23 – Climate Change: Consequences for The National Trust of Zimbabwe

Mr Oliver Maurice, Director, INTO attended the recent conference of the parties (COP) COP 23  under the UN Framework Convention on Climate Change (UNFCCC) which aims to “prevent dangerous anthropogenic interference with the climate system” held in Bonn, Germany. Mr Maurice presented the “Gianyar Declaration: Cultural Sustainability and Climate Change” that was ratified at the INTO ICNT conference held in Bali in September 2017.

Indeed Mr Maurice has attended most of the previous COP conferences  representing the concerns of the global INTO membership regarding the effects of climate change on their heritage sites.

As an INTO member the NTZ first participated, with the very kind assistance of Mr Maurice, in the COP 22 in Marrakech in 2016 when Mrs Sharon Waterworth, Chartered Environmental Scientist and Vice Chair of the NTZ produced a poster for display on climate change in Zimbabwe.  The important issues included: a) the education of NTZ members and visitors to our sites about the effects of climate change b) for the NTZ to share information about what action the NTZ is taking to protect heritage from climate change and c) to be able to get communities involved in protecting their local heritage sites. The NTZ was able to keep abreast of the conference by listening to regular blogs by Mr Maurice and a podcast series run by Mr Bill Turner entitled ‘INTO Conversations that Matter’.

For this years COP 23 conference Mrs Waterworth wrote a paper entitled: “Climate Change: Consequences for The National Trust of Zimbabwe” extracts of which were kindly displayed at the conference by Mr Maurice on the INTO stand.  The NTZ would like to extend its gratitude to Mr Maurice for attending the conference and working hard to highlight global heritage issues with respect to climate change.

Climate Change: Consequences for The National Trust of Zimbabwe

Globally, according to many scientific organisations, including NASA and the United Nations (UN), agreed that 2016 was the hottest year on record. The UN reported that, this was a new high for the third year in a row.  It means 16 of the 17 hottest years on record have been in this century.  2016 was the warmest year in the 136 years of modern data-keeping.  The scorching temperatures around the world, and the extreme weather they drive, mean the impacts of climate change on people are coming sooner and with more ferocity than expected.

Everyone on earth is and will be affected by climate change, but the countries that will experience the most severe impacts are in the developing world.  Africa (with the exception of South Africa and Nigeria) contributes to only 4.6% of total average global greenhouse gas emissions.  The IPCC predicts that average temperatures across most of Africa will increase more quickly than the global average.

Zimbabwe, situated in central southern Africa, is endowed with abundant human and natural resources, and these resources are interdependent. For example, since the economy is heavily reliant on agriculture and electricity, its strength and stability are linked to the climate and particularly the state of the country’s water resources.

Around 20% of its land area, including the Zambezi and Limpopo river valleys, lies below 900 m. The climate is strongly influenced by the Intertropical Convergence Zone, which develops as a result of the collision of warm moist air masses from the north and cool air masses from the south. Zimbabwe has one of the most variable rainfall patterns in the world in terms of distribution across time and space, although dry spells and droughts are part of a normal cycle.

The graph below shows the variability in average seasonal rainfall since records began in 1901. As can be seen by the strongly zigzagging line, Zimbabwe has experienced wide fluctuations in average seasonal rainfall over the last century. The red line on the graph indicates that average rainfall is declining. The decline is attributed to climate change. Zimbabwe’s continental interior location means that it warms somewhat more rapidly in the future than the global average.

Zimbabwe’s National Climate Change Response Strategy states that “Climate change is the biggest threat to humanity today”.  There is evidence from records since 1900 that average annual surface temperature has increased by 0.4°C. There are now, more hot days and fewer cold days than in the past. Climate change is expected to bring an increase in average temperatures across the country of between 1°C and 3°C before the end of this century. Temperature extremes cause ground frost during the cold season and heat waves during the hot season. Annual rainfall could decline by between 5% and 18%, especially in the south. Rainfall will become more variable. There will be an increase in droughts, floods and storms.

A small increase in winter temperatures could have a disproportionate large effect on human health and deaths as it will increase the distribution of the preferred habitats of insects that carry disease including mosquitoes, tsetse flies and ticks. In Africa in 2015, the region was home to 90% of malaria cases and 92% of malaria deaths.

Between 1990 and 2015 Zimbabwe lost 36% of its forest cover at a rate of 9% per decade. Deforestation has become a major problem in recent years as forests have been cleared in preparation for agriculture, for fencing and for use as firewood mainly for tobacco curing and brick making. Natural resources and ecosystem services have been degraded over the years through various human activities. Climate change will accelerate the degradation and its impacts will be felt more strongly. Soils, for example, have been increasingly eroded through annual ploughing, burning for land clearing, building on wetlands, deforestation and poor grazing management.   The lack of controlled water run-off from slopes and uncontrolled open-cast mining areas has added to the degradation.

The country’s economy is heavily dependent on water availability and its gross domestic product (GDP) has been strongly affected by rainfall fluctuations in the past. During years where rains have been good, GDP has increased and decreased in drought years GDP. Climate change will exacerbate hardship and poverty among the people of Zimbabwe, those living in rural areas, will be the worst affected. 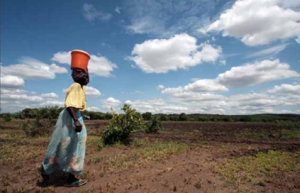 The impacts of climate change in Zimbabwe, particularly the increase in rainfall variability, make it difficult for organizations operating in the tourism and heritage protection sector such as the National Trust (NTZ), who now have to cope with seasonal shifts, wildfires, threats to soil fertility and an accelerated expansion of deserts. In addition extreme weather conditions such as droughts and heat waves, storms and intense rain affect visitor numbers and a lack of water resources at some of the properties is fragile.  The Worlds View property relies on water pumped from a local dam that is dependent on rain water. La Rochelle County House is reliant solely on borehole water to supply the hotel and a holding dam for the up-keep of the gardens.  The water for the Rhodes Nyanga Historical Exhibition is supplied from the adjacent hotel that is provided via a water canal that is owned by the Water Board.  These three sites receive the highest numbers of visitors who require access to water. The Mabukuwene property which also receives visitors: only has access to municipal water which is rarely distributed. Whilst some of the other more remote sites do not have a water supply at all:  Fort Gomo, Sebakwe Poort and Murahwa’s Hill.

It is not only humans that require water to live and together with the destruction of natural habitats, pressure from human settlements and poaching, wildlife populations have been decimated, particularly those of endangered species.  In November 2016 Mr David Dell, Chair of The Friends of Hwange ( one of the oldest and largest National Parks in Africa) announced that there was certainly an increase in the heat levels in the Park and 2016 was  particularly hot as has the last few years. Elephants not only need water to drink but also to keep their bodies cool. Their skin has many small cracks into which moisture is trapped by mud and as it dries the latent heat of evaporation helps to cool them down. It is hard enough providing water to drink let alone enough to keep them cool. We are seeing a number of elephant deaths in the Park. Buffaloes are also succumbing to the extreme heat.   Apart from these two species suffering other animals are also having a hard time as they cannot get to the water as the troughs are dominated by elephant.

Scientists worldwide agree that global warming is happening, and that human activity causes it. We now need to implement adaptation and mitigations strategies to combat the terrible effects of climate change and to prepare for the future by reducing greenhouse gas emissions. Primarily, we must protect the natural resources on which our lives and livelihoods depend by introducing better land management practices

Mitigation strategies are actions to prevent, reduce, or slow climate and/or landscape change such as increasing the use of solar and wind energy and reduce ecosystem vulnerability, conserve biodiversity and restore degraded ecosystems.  Communities, too, can adapt for example by switching to more drought tolerant agricultural crops, increase the use of irrigation in crop production in areas expected to become more arid, maintain landscape connectivity to aid vegetation and wildlife migration.

At the recent International Conference of National Trusts held in Bali,  the NTZ, as a member organization, pledged to implement (wherever possible) the Gianyar Declaration for Cultural Sustainability and Climate Change that was ratified at the conference by undertaking the following actions:

The NTZ is dedicated and actively working to reduce the impact of climate change that is threatening each and every one of us.