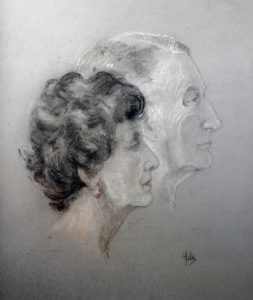 In 1890 Virginia Periano family moved to London from Romania where she received a convent education.  Rebellious and unorthodox, while still a teenager Virginia had a large snake tattooed down the front of her right leg, a shocking choice for a convent schoolgirl to make during the Edwardian era!   Her marriage to the aged Italian Count Spinoza was annulled by the Vatican and on 20 August 1923 she married Major Stephen Courtauld at Fiume in Italy and after living in Etham Palace in England  she ended up living in Zimbabwe (formerly Rhodesia) . Together Sir Stephen and Lady Virginia Courtauld built La Rochelle estate, comprising of 108 ha , in 1951 as a retirement home, and donated it to the National Trust of Zimbabwe in 1970. 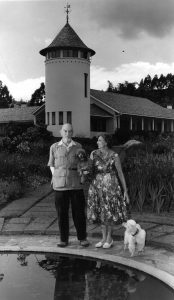 On 16 June 1954 Stephen and Virginia became citizens of Rhodesia and over the next 13 years their major achievements included the funding of the construction of buildings for:

In their unobtrusive quest for a just and non-racial political dispensation in their adopted country the Courtaulds were also the main sponsors of the Capricorn Society Africa, a pressure movement that sought to improve  relations between races in the British-administered countries of sub-Saharan Africa.

Virgina, with her kind and generous nature, had a deep desire to improve the welfare of the women in the rural areas and so she established a ‘Homecraft Club’ on the property where she taught needlework, embroidery, cooking and domestic science.  The women were able to sell their arts and crafts and for the first time financially support their families.   Her important contribution was made quietly and modestly, with sincere humility and she improved the lives of many African women over the course of several years.