Mabukuwene is one of seven National Trust of Zimbabwe (NTZ) properties. The twelve hectare site comprises of three separate plots that were purchased and consolidated by the successful businessman Mr. Thomas Meikle, which were given, by his daughter, to the NTZ in 1979.  One portion of the property has since been returned to the Thomas Meikles Trust (TMT) as this section contains the Meikles family cemetery and the main infrastructure.

The property is situated about five kilometres south of Bulawayo City centre. It is a tranquil place and consists of indigenous trees and plants set in an un-spoilt area of kopjes whose distinctive pink hue distinguishes it from other rocky environments in and around Bulawayo. Mabukuwene means ‘high point’ and there is a ‘look-out’ built upon a rocky outcrop 1,422 m above sea level that once afforded a 360º view point of the area (sadly much of the view has since been hidden by trees and residential development). The property has a long social heritage that extends back from at latest 250,000 years to the early colonial era. This history is represented as archaeological sites, old village remains, rock paintings and various stone and brick-built structures.

Over a decade ago the NTZ was alerted to the fact that there had been a serious invasion by an alien plant species called  Lantana camara which had developed into a veritable forest and threatening the indigenous plant species at Mabukuwene. In Zimbabwe its common name is ‘Cherrypie’ or ‘Tickberry’.  Originally from Central America Lantana is an invasive shrub that can grow up to 4m high with numerous square branches with hooked spines. When scrambling on other trees it can reach heights of up to 15m. 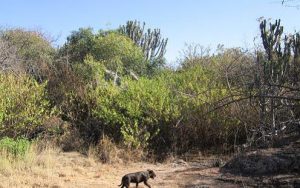 The lime green bushes are all Lantana smothering the indigenous vegetation

The fruit has many berries that ripen a purple-black. Each contains a seed and in flush a single large bush can yield up to 12 000 seeds. The plant has a short taproot and a mat of many shallow side roots.   The flower colour may be red, purple, pink, with yellow centre, salmon, orange, pure yellow, white etc. sometimes the inner flowers a different colour from the outer. We certainly see a great variety of colours in Zimbabwe. 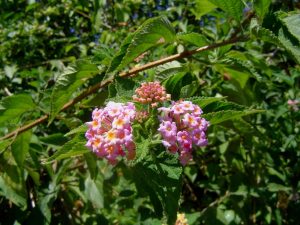 Lantana spreads both by seeds (a food favoured by small animals and birds) as well as layering where horizontal stems take root when in contact with moist soil. Seeds can remain viable in the soil for a decade or more. This species often forms impenetrable thickets that rapidly takes over and out-competes indigenous vegetation. It becomes an aggressive invader of disturbed and overgrazed areas, it is extremely difficult to eradicate. Simply cutting it down is effectively a waste of time as it coppices and the area is left in a worst position.

It’s ousting of indigenous plants has a negative impact on various bird and insect species which are dependent on specific host plants. Lantana has been nominated as among 100 of the “World’s Worst” invaders on the Global Invasive Species Database. In Zimbabwe it is declared as a noxious weed under the Environmental Management Act (Chapter 20:27 Section XIII). It can be poisonous to both livestock and children.

As part of its mandate the NTZ desperately wanted to clear the noxious weed from the site.  In 2013 Mr Dave Mason of the Thomas Meikle Trust (TMT) and Malcolm Ross, a local resident expressed interest in assisting with a clearing project. In 2014 the NTZ managed to find a small amount of money to start clearing the Lantana on a small scale and then in 2015 the TMT agreed to finance the clearing project. Work was stepped up and clearing started in earnest and the Lantana extending from the main gate away to the distant boundaries was cut back to about 30 cm above ground level and left in small piles for burning. Permission to carry out a controlled burn by the local fire brigade was granted by the Environmental Management Agency and Bulawayo City Council. Local residents were informed of the burning, as well as the Town Clerk and the Head of Parks.

Burning stimulates further Lantana seed germination so the emerging seedlings that arrived after the rains had to be removed by hand. Constant vigilance will be needed for many years to come to ensure that all emerging seedlings are uprooted and burnt. Unfortunately there is no quick solution. As the plants regenerate the larger ones were treated with a selective chemical to kill them off. 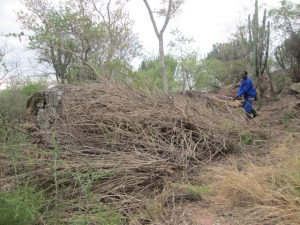 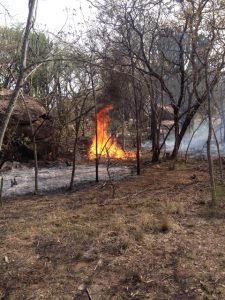 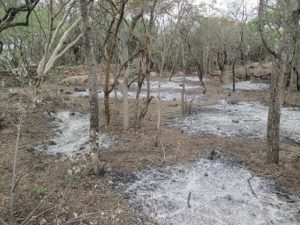 After seeing such an improvement at the site the TMT agreed to continue the clearing exercise in 2016 for which the NTZ were very grateful for. Fortuitously also for the NTZ, Busani Bafana one of the Board members at the National Gallery of Zimbabwe, Charles Wawn of Eco Logical Safaris and Travel and Hylton Price of Halsted’s kindly offered to assist and a small working party/committee was established. During the course of the year Lantana was re-cleared from the central area and from the really badly infested hills on the west side and from a section of the Meikles area along the north side of the road way. 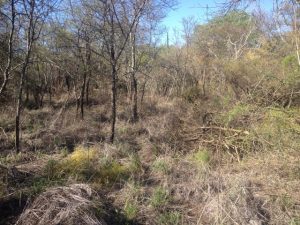 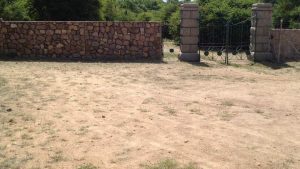 The NTZ would like to commend Mr Mason and the Meikles staff for clearing out most of the litter that was thrown in the bushes along the entrance road.

Several of the stone walls that had collapsed in a number of places, one section fell down after a 25 mm rainstorm, were rebuilt. 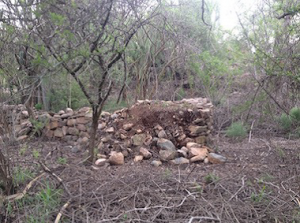 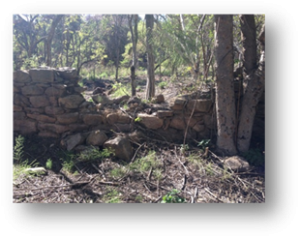 A new cement stone wall was built and the historic wrought-iron gate moved to its current location. The main entrance wall was repaired: it was seriously leaning over (being supported with gum poles). 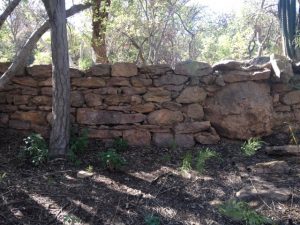 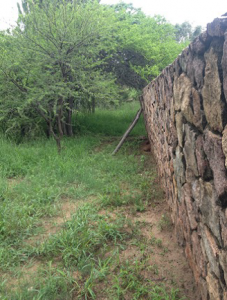 Fortunately, in 2017, Meikles continued to fund the clearing of the Lantana and the team started with the outside of the gardens along with the clearing of a 4 metre width fire guard (from the fence) both inside and outside of the property.  In October when the wind and temperatures conditions were right, the fire brigade carried out another controlled burn of the cut Lantana. During the whole clearing exercise other invasive species like Mexican Sunflower were also removed. Happily the Prickly Pear is being destroyed by cochineal bug, interesting to see a natural biological–control process in action.

This year we are delighted to say that the clearance of the Lantana along the perimeter fence was finally completed after many grueling months of hard work and that the Lantana, within the rocky areas, that re-grew (following the rains) will be sprayed with herbicides.

The NTZ would like to express its sincere gratitude to TMT, in particular to Dave Mason, for continuing to fund the clearing exercise and for all their assistance at the site. The clearing of the Lantana cannot be over stated enough. The NTZ would also like to extend its appreciation to the working party consisting of Busani Bafana, Charles Wawn, and Hylton Price whom worked tirelessly often under difficult circumstances.  We are also very grateful to Halstead’s for donating equipment such as gloves, boots, refuse bags and various tools.

The project has led to the NTZ working with new people and stakeholders and we are enjoying the relationships that have been formed and very proud of the significant progress that has been made. The clearing has enhanced the beauty of the site and visitor experience and most importantly the removal of Lantana is leading to the restoration of the property’s natural biological diversity.

The NTZ acknowledges Busani Bafana for supplying most of the photographs.