The Nyanga Rhodes Historical Exhibition museum, a National Trust  property in the Eastern Highlands, is proud to announce its latest project: the opening of a new exhibit entitled “Zimbabwe Time Line” which depicts salient historical events related to Zimbabwe during the period from BC to 1980.

All Council Members participated, each researching a 30-year period, and we now have on display five periods from BC until 1980.

Please click on the link below to read the full article:

After spending a refreshingly relaxed day in a welcoming atmosphere one can walk to the herbs and spices farm and pick fresh herbs to make yourself a cup of herbal tea or if you prefer, pick a few to garnish your sun downer drinks with.    This new and unique activity is on offer at the newly re-opened La Rochelle Country House and Spa, a magical cross twixt fairy tale castle and French chateau, surrounded by manicured gardens on the edge of verdant forest-cloaked mountains. This luxury country house is an oasis of tranquillity and charm comprising of 108 ha, is one of the best known of the National Trust of Zimbabwe (NTZ) properties situated in the lush, green Imbeza Valley in the eastern border town of Penhalonga, near Mutare. It was renowned in the 1950s and 60s for Sir Stephen and Lady Virginia Courtauld’s lavish and warm hospitality and has long been recognised as one of the most celebrated botanical gardens in Zimbabwe as well as an icon of the Art Deco movement.

La Rochelle is a place of beauty for Zimbabweans to treasure, a heritage the Courtaulds wanted to share with everyone. Today, it’s dedicated management team aims to be the intersection of nature, history, culture and the arts, creating an ambience of holistic wellbeing.

Please click on the links below to read the full article:

Join the many people that visit the unique public display of ancient manuscripts, photographs and other exhibits of interest
relating to Nyanga and persons and events connected with its history and development on display at the Rhodes Nyanga
Historical Museum. The museum is a National Trust of Zimbabwe property. It was built in 1897 by Mr Marks a stonemason
for Cecil John Rhodes and it is located in the Rhodes Nyanga National Park.

On his death in 1902, his Nyanga Estate was bequeathed in trust to the people of Zimbabwe. In May, 1974 the National Trust Zimbabwe acquired the right to occupy the building for the public display of manuscripts, photographs and other exhibits of
interest. Which means the museum celebrated its 40th Anniversary in 2014.

Connect with the present and the past as you wander around the fascinating exhibits on show inside a historical building known as Rhodes Stables. Enjoy the memorabilia depicting the life and times of early Zimbabwe, from the Stone Age to modern times together with the art, culture and traditions of this beautiful area.

The Museum is now larger than ever………..

Please click the ink below to read the full article:

Take a seat and sit above the clouds and birds flying and gaze down from one of the highest points in the land of
Zimbabwe across the central plateau almost a kilometre below. The view is of a land of mystery, of peace and of
extreme beauty and it seems endless.

Where can you find this amazing view? At Worlds View, a National Trust property where from an altitude of 2000
m the escarpment drops 600 m to the plain below. Mr Michael Tucker recently very kindly donated two
hardwood benches which are now the crowning glory of the kopje. The benches were designed and made by
Gary Goss, a local bench craftsman. Sit and eat your picnic whilst soaking up the magnificent view, there are
various picnic tables for your personal use.

Please click the link to read the full article:

You are cordially invited to visit the National Trust stand at the: 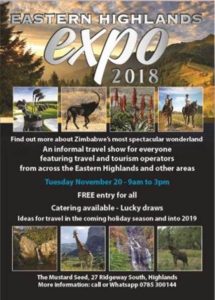 ‘The Yawn Dog’, ‘The Mighty Eagle’ and ‘Hongwe’s Ponder’ are a few of the fascinating titles given to Jonathan Matimba’s traditional Shona sculptures that are enriching the display at the Rhodes Nyanga Historical Museum. The late Jonathan Matimba is one of the three most famous and influential stone and wood carvers of the 1950s and ‘60s. 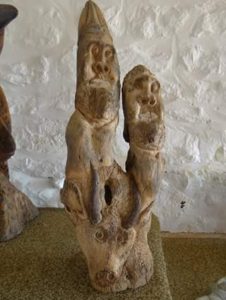 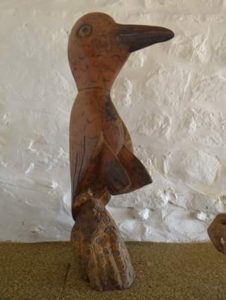 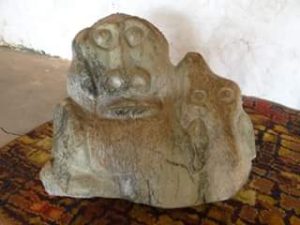 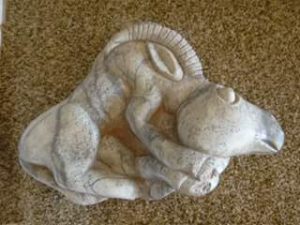 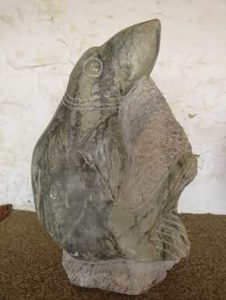 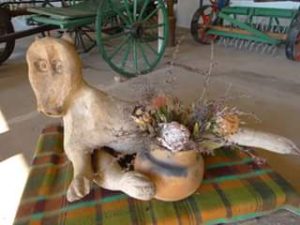 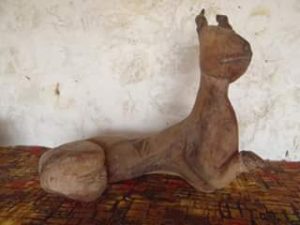 ‘Seed Pod’, ‘Morning Love’ and ‘Flying Dream’ describe some of the modern pieces of work, crafted by our Nyanga and Claremont sculptors, giving an interesting contrast to the onlooker. Most of the modern artists are sons or grandsons of famous sculptors of the last century: Joram Mariga, Manyandure, Takawira, Sande and Chaudiringa, many of whom were brought up in the Nyatate area of Nyanga North, and sold their work locally and overseas. 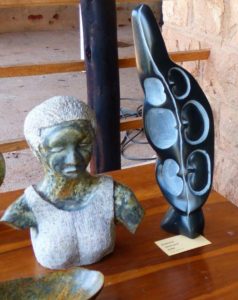 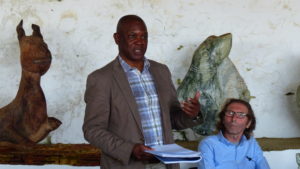 Dr. Zilberg is Associate Research Scholar at The Centre of African Studies, University of Illinois, gave an exhilarating talk on the history of Nyanga sculpture, mentioning the importance of women such as Miriam Mbwaburi, who sold woven reed mats at the local hotels in the ‘50s. Miriam was encouraged by the Rural Council to establish the Nyanga Craft Village and to invite potters and sculptors to join her.

Dr. Zilberg explained to the audience, which consisted of local folk, sculptors and their families, some important points which make sculptures appealing to buyers.  During the weekend he spoke with many of the artists, encouraging them and giving helpful advice.

A record number of visitors took advantage of the Open Day by touring the Museum, and enjoyed the refreshments. This special exhibition has been extended from the intended closure on the 14th August 2018. The Matimba family is happy to leave the work at the Museum for a few months. 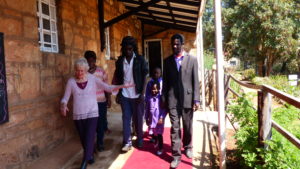 The idea and inspiration for the exhibition came about thanks to Dr. Zilberg, who visited Zimbabwe last year and made us more aware of the wealth of talent  – historical and modern – which we have in our area.  On a trip into the Nyatate area, north of Nyanga, we were grateful to have be introduced to one of Jonathan Matimba’s sons, Munetsi who took us to the Matimba homestead where Mrs Matimba is still alive. You can just imagine our surprise when we arrived there and saw the extraordinary wooden sculptures. Then, even more amazingly, Munetsi dug his hands down into his granary and started pulling out his fathers’ stone sculptures. He told us that his father, Joram Mariga and Bernard Manyandure had gone to school up the road at Mt Mellory Mission School and that they had all learnt to carve there.

The family agreed to let us display some of Jonathan’s works for as long as we wish, in order that they can be seen and appreciated by the public.  The transport of the works of art from the Matimba’s homestead was kindly made possible by a donation from Mr Rob Burrett.

The discovery of this unique collection and this being the first exhibition of the artist’s works is of great significance and of national historical interest. We are very proud and privileged to display these rare early pieces of art for public enjoyment.

is proud to present an

View the unique exhibition of stone and wooden

carvings and sculptures by Nyanga’s

and modern-day sculptures by artists from the Nyanga Craft Centre, Claremont and

The Exhibition will be open from

for African Studies, University of Illinois.

Free Entry on Monday 13th August. This includes a tour of the Museum.     Teas available.

We are very pleased to report that the herb farm training centre at our La Rochelle property has seen the establishment of 10 hectares of ‘field test’ of organic herbs. The trials are well on their way and fast expanding. The project presents an exciting opportunity for ensuring the economic viability of La Rochelle, training and supporting small scale farmers, caring for the environment and raising the profile of the NTZ regionally.

Please find below links to two articles that have been published recently about the project:

The Rhodes Nyanga Historical  Exhibition is excited to announce that the museum display has been enlarged and enriched by the addition of a wonderful collection of traditional Shona Sculptures by Jonathan Matimba, one of the three most famous and influential stone and wood carvers of the 1950s and ‘60s.  This has come about thanks to Dr Jonathan Zilberg, who visited Zimbabwe last year and made us more aware of the wealth of talent  – historical and modern – which we have in our area.

On a trip into the Nyatate area, north of Nyanga, we were grateful to has as our guide, one of Jonathan Matimba’s sons, Munetsi, who has kept in touch with us.  The family offered some months ago, to let us display some of Jonathan’s works for as long as we wish, in order that they can be seen and appreciated by the public.  If interest is shown in purchasing any of the pieces, the prices will be available.

The transport of the works of art from the Matimba’s homestead was kindly made possible by a donation from Mr Rob Burrett.

The sculptures are now on display in the Wagon Shed.  We are awaiting a full history of the life of the artist and the titles and explanations of the meanings and inspiration behind each work of art.

Members of three of the main  modern-day  Nyanga stone sculptor groups have been invited to bring one piece of work each to display along with Matimba’s work for the duration of the long weekend: 10th-15th August 2018. Please do join us: we would love to share our new collection with you.

The museum is proud to announce its latest project: the opening of a new exhibit entitled “Zimbabwe Time Line”which depicts salient historical events related to Zimbabwe during the period from BC to 1980.

All Council Members participated, each researching a 30-year period, and we now have on display five periods from BC until 1980. 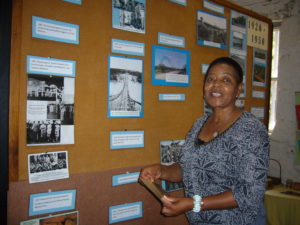 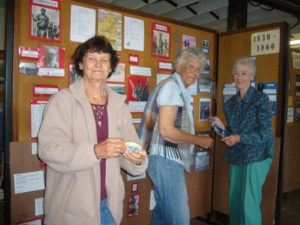 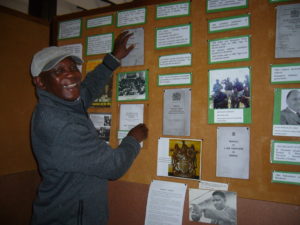 The last period:  1980 to the present day, has been researched and written up for us by the teachers and pupils of the History Department of St. Monica’s High School. 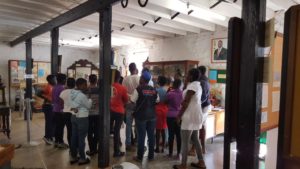 Great interest is being shown already by the many school children who visit the museum.